Clara hand’s shook slightly as she caressed the wooden box. Taking a deep breath, she flipped the latch and opened it. Everything was as it had been the last time she had seen it, and she smiled at the memory. Lifting a worn book off the top, Clara set it aside. Beneath it was a picture frame with shattered glass. The picture was one her biological father had taken of her and her mother at their favorite picnic spot a few short months before she had died.

Clara lifted the picture out and held it for a moment before placing it on the vanity. As she went through the box, her mind went back in time. She didn’t notice her father leave the room. Quietly closing the door behind himself, Bruce walked back down the hallway toward the stairs. Two flights of stairs later he stood in the main hallway that ran from the front to the back of the mansion. Standing in the hallway was Richard. He was looking at the family picture that was hanging on the wall.

“Alfred set me up in a guest room. I already started a program to search for another place that has access to the cave system.” Richard informed Bruce, not moving his eyes from the picture.

“Good. If you need anything, let me know.” Bruce replied passing him and heading for the secret Bat Cave entrance.

“So, what do we do now?” Barry asked as Bruce came down the steps into the Bat Cave.

“I’ll analyze the data Richard and Clara have gathered. If I find something, I will let you know.” Bruce replied firmly, walking through them to sit down at the Bat Computer.

“I call patrol duty!” Flash exclaimed, jumping up and whizzing off before anyone could argue.

“I’ll be at the Planet if anyone needs me.” Superman said before flying off through the cave system.

J’onn walked up the stairs without an explanation.

Green Lantern gave Wonder Woman a significant look before flying off in the direction Superman had gone.

Diana waited a few moments before taking the other desk chair and swiveling it so that she could see her friend’s face.

“Bruce, what is it?” Diana probed gently, her slight accent accentuated by the softer tone of her voice.

“I have no idea what you are talking about.” Bruce protested brusquely, focusing on the file he had brought up.

“You’ve been acting strange ever since Waller barged in here demanding answers. I noticed the same thing when we took down Lex’s CADMUS. You know more about CADMUS and Waller than you have told any of us, even me. The question is why.” Diana retorted, crossing her arms and giving him a no-nonsense look. After few minutes of silence, Bruce stopped typing and sighed resignedly.

“Before Luther took over CADMUS, there was project called Experiment Bird5. The original intent was to discover if it was possible to create a nano burst that would allow humans to fly like Superman. They picked the one person who was an expert in the field but wouldn’t be easily missed by society. His name was Dr. John Shanai.” Bruce began, folding his hands in front of him and focusing on the keyboard.

“Shanai…. As in the mad scientist who has caught working with the Joker over 10 years ago?” Diana asked, as the explanation slowly dawned on her.

“Yes. They pulled him out of prison and set him up in a remote facility to create the formula. What they didn’t realize was that he isn’t actually fully human. Instead of the nano burst he was instructed to create, he created one that gave him his alien abilities back. In doing so, he eliminated everyone else in the facility. Then he used the Superman DNA CADMUS had provided as a starting point for the original project to make different formula. Combined with an extremely dangerous process he developed, it would grant the subject the power of the Kryptonians.” Bruce continued, his eyes never moving from the keyboard.

“I don’t remember hearing anything about another Kryptonian besides Supergirl since Superman defeated General Zod.” Diana commented, her determination replaced with confusion.

“He didn’t use the formula on just anyone. He picked the one person he knew could withstand the process. His biological child, the girl I adopted after he was arrested and given a life sentence. She is why I made an agreement with Waller. As long as CADMUS’s actions do not threaten Gotham, I won’t get in their way and they won’t get near her.” Bruce finished as if he hadn’t heard Diana’s last sentence.

“Does Clara know?” Diana inquired, glancing up the stairs.

“They both know. But they also both know that if CADMUS starts creating an anti-Justice League army that it won’t matter. They will eventually come after her for the genetic information that is inside of her. And at that point Waller will put her so-called duty to her country above keeping her word.” Bruce replied, looking back up at the info on the computer display. 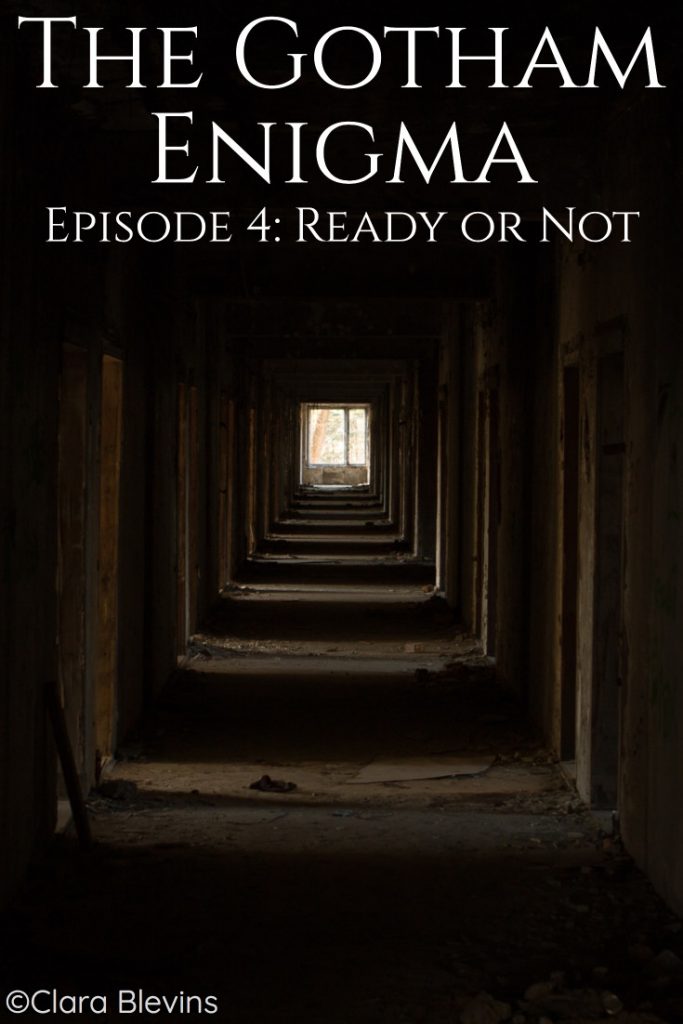 Clara crept slowly along the corridor, trying to find the source of the consistent clicking noise. Richard was covering the other side of  the passage way and as she glanced his way she noticed something very peculiar. The noise had stopped and there was complete silence except for the steady drip, drip of a water leak somewhere nearby. Suddenly there was the sound of gunfire. Instantly both of our heroes reacted by dropping into a crouch to avoid getting hit by the bullets that where now flying through the air.
Using her speed, Clara grabbed the gun and broke it in half. The gunner charged her, only to find himself charging at empty space. That was when Richard’s baton hit him in the head. In a few short minutes the other guards joined their companion in unconsciousness.

The main room was filled with boxes and crates. There was a small rickety wooden desk, chair and lamp in a clearing in the center, but not much else. Richard began sifting through the things on the desk while Clara used her x-ray vision to scan over the contents of the boxes and crates. That was when Batman’s voice came through their com links.

“Where are you two?” He inquired irritatedly.

“Investigating a lead.” Richard replied, indicating the desk with his head. Clara joined him and looked at the papers he had found. Nodding, she folded them and placed them in her vest pocket.

“Get back to the cave as soon as you can. I think I have something.” Batman instructed, sounding less angry.

They drove into the Bat Cave, Clara and Richard could see the Justice League gathered waiting. Richard gave Clara an apprehensive glance. Returning his glance with a reassuring smile, Clara stepped out of the car. Batman’s expression looked neutral, but Clara detected the slight change when he saw them.

“What did you find?” Richard inquired, either not seeing or choosing to ignore the change.

“This.” Batman stated, handing Richard an image. Clara moved to stand at his side, her hand on his shoulder as she looked at the image in his hand.

“Interesting. . .” Richard murmered, placing the image on the table and holding his hand out. Clara handed him the evidence they had gathered at the store house. Placing it next to the image, he studied the closely for a few moments.

“What is it?” Green Lantern inquired impatiently.

“The answer to who is in charge of the science part of their cloning agenda.” Richard replied with stunned expression.

Episode title was inspired by Ready or Not (feat. Lecrae) by Britt Nicole